Scott Sports was founded in the United States by Ed Scott in 1958. This very innovative brand, well known in the world of cycling, has also revolutionized winter sports, especially skiing. It is with its ski pole, the very first aluminum pole, that the brand became known. It then released the lightest ski boot in the world before entering the textile and accessory markets with a line of technical clothing and gloves. It was not until 1998 that Scott finally started producing skis. The Scrapper, his carbon ski, was simply taken over by freeriders. Today, Scott is undeniably one of the leaders in this ski market! Read more Show less
10 items

The Scott Pure 90 is an ideal freerando ski for small and young skiers. It is both stable and performs well in a variety of conditions, while remaining light and easy to ride.

The freeride ski Scott Scrapper 105 promises you great sessions in fresh snow while maintaining a very healthy ride on the track. It is slightly bispatulated for better maneuverability.

The versatile women's ski Scott W's Scrapper 95 will accompany you on all your adventures by offering excellent performance on all terrains and in all types of snow.

The SUV is a versatile cheap ScottÂ ski that is performant both on and off-piste. It is ideal to boost your level on all terrains and features a tip rocker for good buoyancy.

The Scott Slight 88 + E M10 Gw L90 men's ski shines due to its versatility and its accessibility to provide unique sliding sensations in freeride while remaining super-efficient on piste.

The freeride ski Scott Scrapper 105 promises you great sessions in fresh snow while maintaining a very healthy ride on the track. It is slightly bispatulated for better maneuverability.

The SUV is a versatile cheap ScottÂ ski that is performant both on and off-piste. It is ideal to boost your level on all terrains and features a tip rocker for good buoyancy.

Powered by the freerider Jérémie Heitz, the Scrapper range impresses by its rigidity and lightness. Available in 90, 95, 105 and 115 mm on the skate, Scott Scrapper skis are suitable for a large number of skiers. The more you advance in the range, the more the ski is dedicated for pure freeride use. The flotation is excellent and the lift provided by its double rocker ensures great fun sessions on the still virgin slopes of the mountain. As for the 90 and 95 mm versions, they are more versatile, you can ride on hard snow as well as soft snow. The ultimate ski series for anyone who wants to operate all over the mountain.


The all-mountain Slight range is built around a paulownia core to combine lightness and stability. This core is reinforced with fiberglass and carbon for excellent torsional rigidity. Available in men's or women's version, the Scott Slight ski is a true 4x4 snowmobile at ease on both hard early morning snow and soft spring snow. The range has models ranging from 83 mm skid to 100 mm. The latter is all the more efficient in off-piste driving, enjoying a good flotation in fresh snow. While the thin version is more suitable for use on groomed snow and on the edge of the piste. With Scott's Slight range, there's something for everyone! 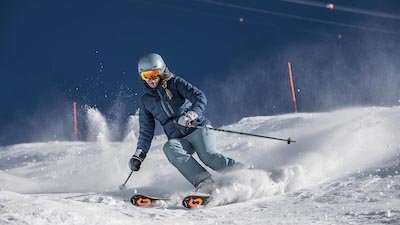