Are you looking for a good splitboard binding to complete your pack?

In this section, you will find many models of splitboard bindings, selected among the best brands of the discipline such as Karakoram, Plum, Burton, Rossignol, etc... Extremely qualitative, Karakoram splitboard bindings are the bindings of choice of Jeremy Jones, freeride snowboarding legend and splitboard enthusiast. As for the Plum splitboard bindings, they add a string to their bow since they are made in France, in addition to being also very technically advanced. Thus, each of these brands has been able to develop its own models, with their own advantages and specificities. To help you choose, you can refer to our purchasing guides and detailed product descriptions.

The Plum Splitboard binding Eterlou Black Grey is ideal to start practicing splitboard. It will offer you all the lightness you need during the climb and a excellent compromise between reactivity and tolerance downhill.

The Explorer is a splitboard Union binding that offers reactivity and comfort, with a plastic frame that is very pleasant to ride and a pin system for switching from ascents to descents.

The Explorer FC is Union's most premium splitboard binding. Its robust and lightweight construction offers great performance, taking advantage of materials such as carbon and titanium.

The Explorer is a splitboard Union binding that offers reactivity and comfort, with a plastic frame that is very pleasant to ride and a pin system for switching from ascents to descents.

The 4 Parts Specs Splitboard Plum binding was thought out for 3 to 4-part boards. With its top-of-the-range built, it is not only light during the climb but also reactive on the way down.

The Plum Eterlou 4 Part splitboard binding is a top of the range, durable and reliable model for 4-part splits, offering great performance but not necessarily too radical or demanding to ride.

The Karakoram Prime Nomad Women's is a women's splitboard binding offering both lots of performance, strength and lightness to munch through elevation gains and fly down the mountain.

Karakoram's most affordable model, the Prime Grizzly is a technically accessible splitboard binding that is comfortable to ride, but still reliable and performs well in all circumstances.

How do I choose my splitboard bindings?

The practice of snowboard touring via splitboard requires the use of specific bindings. In addition to providing the functions of a traditional snowboard binding, they are designed to allow you to use them in touring mode. They are then mounted from the front on wedges located in the center of the splitboard via a system of pins or lugs that differs from one brand to another. In downhill mode, they are attached to an interface system that replaces the usual inserts of a "solid" snowboard. These interfaces also change from brand to brand.

What are the different splitboard binding systems? 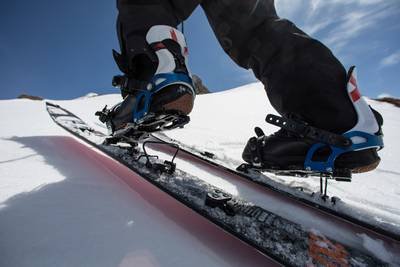 Currently, there are 4 systems of splitboard bindings:

The Plum and Karakoram systems are the most similar. In downhill mode, the bindings are fitted and locked to the pucks by means of a side hinge for Plum and via a handle on the back of the binding for Karakoram. In hiking mode, they are fixed thanks to a pin system (which can sometimes get icy, requiring a quick polishing). A bit slower than the Voilé system, the Plum and Karakoram systems remain very practical and well done. They will allow you to take full advantage of the lightness and performance of the bindings developed by these brands.

Finally, the system proposed by Union is a little less modern, requiring more handling when switching from one mode to another. On the other hand, it can be very interesting for a snowboarder who is just starting to splitboard and/or who is looking for a more flexible and comfortable splitboard binding for a Freestyle/All-Mountain feeling.