Do you want to try other sliding pleasures?

So come and discover our selection of mini skis, mono skis or other fun skis. In recent years, we have seen the emergence of new disciplines that are increasingly fun for skiers looking for more thrills. For example, you can let yourself be seduced by the snow scooter (or snow kick), snow bike, snow skate or even the yooner from TSL. So many new concepts to discover or rediscover with family or friends! Read more Show less
1 item

Back in recent years, monoskiing proves that once again, tastes and fashion are just a perpetual beginning. (Re)discover beautiful sensations with the Faction monoski!

What to choose to practice another sliding sport?

Over the years, skiing and snowboarding have undergone several changes. From straight skiing to parabolic skiing, other styles have emerged such as freeride, freestyle or freeskiing. As for snowboarding, it was designed to be an alpine alternative to skiing before becoming a true state of mind in its own right. We all know these two great classics of our stations, but what about the other disciples?

In the late 1970s, before the advent of snowboarding, an alien from the United States appeared: the monoski. A sliding sport that is practiced with both feet facing the slope and perfectly parallel. With a large skid width, it is particularly suitable for powder snow and bumpy fields. It was especially popularized in the 1980s thanks to the films Apocalypse Snow 1, 2 and 3. Today, it is rarer to see mono skiers but some nostalgic people show their walkman and their multi-coloured suit to practice this beautiful discipline. So why not you? Brands like Snowgunz still make mono skis by integrating modern technologies and keeping a retro chic look.

Already more popular in the resorts, mini skis, or short skis, are ultra-manageable, accessible and very playful models for a maximum of sensations without getting carried away. This discipline is practiced with short skis that are very easy to transport and without poles. This type of skiing has the advantage of being very easy and quick to learn for pure skiing sensations from the first day. If you are looking for handling above all at the expense of control and stability then you have come to the right place! In the brands, there are alpine giants such as Salomon, Swallow or Elan.

Other sliding concepts are gradually gaining ground in resorts such as snow kick or more commonly known as snow scooters, but these are not electric. With this type of model, it's immediate and fun to get started! No need to explain how it works, it drives like a classic scooter and promises extraordinary sliding sensations. It is more dedicated to children or adults who want to slide down the slopes by performing freestyle tricks. The Stiga brand offers very practical and efficient folding models. 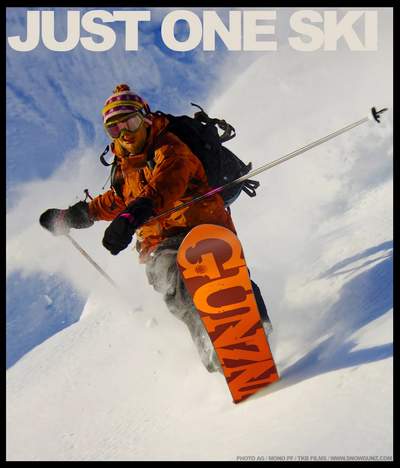 You know skateboarding but do you know snow skate? Take a skate, remove the wheels and you get a snowskate. The goal is to regain the same sliding sensations with the possibility of performing the same tricks. Designed for riders who want to have fun on the street as soon as the snow falls, this board is designed for fun. The Stiga brand makes very good and very solid models to handle jumps.

Not very popular but very fun, the paret, or yooner, is a small wooden or plastic sled for the modern versions, which allows you to run down the slopes in a very playful way low on the ground. The TSL brand offers very modern yooner models with a focus on comfort and sliding pleasure. There is even a brake to keep control in tricky situations.

Now that you have been offered all these choices of mini skis, mono skis or other fun skis, get ready for this winter!