How to choose the right carabiner?

The carabiner is an important piece of mountaineering and ski touring equipment. This small metal object, available in several sizes and shapes, is the connector between your rope and your belay point. It is an essential safety element, so choosing and using it properly is essential before setting out on an expedition. Its characteristics depend on your practice and your goals.
4 items

What are the different types of carabiners?

First of all, we will look at the common parts of the different carabiners. A carabiner has a ring-shaped body, which is where the force is supported. And a finger, the spring-loaded side of the carabiner that opens and connects to your equipment. For mountaineering and ski touring, aluminium carabiners are preferred for their lightness.

Symmetrical shape: A symmetrical carabiner has been a classic for decades. It allows for easy swivels while being very stable. An excellent choice for connecting a pulley. However, it knows its limits in situations where force is important because of its symmetrical shape which transfers weight evenly between the body and the finger, thus making it more fragile.

D-shape: Designed with an asymmetrical shape, a D-shaped carabiner transfers more force to the body than the finger to increase resistance. This is the most common shape, allowing you to connect a belay point or use a lanyard. In addition, because of this design, it is lighter than the others and has a larger opening.

The pear shape or HMS: designed for belaying, it is very easy to use thanks to its wide opening. It is made from a thick bar which allows it to accommodate large knots or other devices. If you're not sure which shape to choose, a pear-shaped carabiner is a sure value that is suitable for most handling. 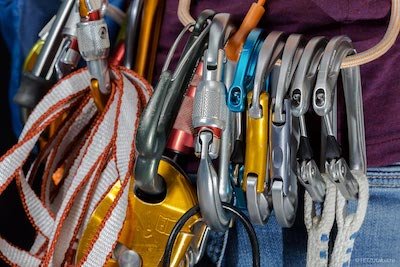 What are the different types of carabiner locks?

A locking carabiner has a similar design and function to a non-locking carabiner. What is the difference? A sleeve on the finger is used to attach it firmly to the nose. This provides extra security without the risk of unintentional opening.

The screw carabiner: The screw lock has a threaded sleeve that can be screwed on manually to open or close the finger. It can still be handled even with gloves on and does not jam with gel. However, be careful not to forget to lock it!

The automatic carabiner: The automatic carabiner, as its name suggests, locks automatically with two or three movements depending on the model. The locking is done by turning the carabiner's barrel, so that you don't forget to lock it for maximum safety. However, the system is more sensitive to frost, earth or dust and tends to make opening difficult.