The words of Georges Salomon 'I am fascinated by what I am going to do tomorrow' sum up the brand spirit pretty well. Created in 1947 in the heart of the French Alps, Salomon is distributed in 160 countries around the world. Focused on innovation, they make reliable products designed for mountain lovers. Originally based in a small workshop making woodsaws and ski edges in Annecy, France, Salomon has quickly become a leader in ski bindings before expanding its range action to make everything you could possibly need for skiing.
Show less
554 items
+ bindings

The Salomon QST 92 is an ultra versatile all mountain ski, perfect for having fun and playing its way across the whole mountain.

With its outstanding versatility, the Salomon QST Lux 92 is definitely a women’s all mountain ski. It’s the perfect do-it-all quiver to ride the whole mountain.

The Salomon Freeski Boot Ghost FS 80 will propel you to the next freestyle level. Powerful and comfortable, you're going to land your tricks in cotton!

The Salomon QST 92 is an ultra versatile all mountain ski, perfect for having fun and playing its way across the whole mountain.

With its outstanding versatility, the Salomon QST Lux 92 is definitely a women’s all mountain ski. It’s the perfect do-it-all quiver to ride the whole mountain.

The Shortmax 125 from Salomon is a short ski with only one objective: loads of fun! A real toy made to link turns and tricks!

Fitted with the Mips technology, the Salomon Ranger 2 Mips Black ski helmet is the guarantee that you’ll get the best protection against vertical and diagonal impacts in case of fall. 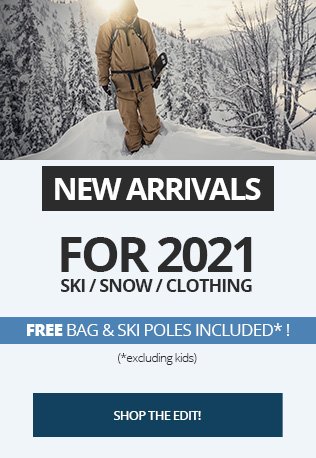 Fitted with the Mips technology, the Salomon Ranger 2 Mips Black ski helmet is the guarantee that you’ll get the best protection against vertical and diagonal impacts in case of fall.

The Spell White is an affordable and accessible women snowboard binding developed by Salomon. It is forgiving and easy to master which makes it ideal for beginners.

The S Max 6 is one of the best beginners ski developed by Salomon. It will suit intermediate skiers looking for comfort and ease on the slopes.

The Salomon Shortmax mini ski is fun on all terrains with its immense agility and fun-oriented side. A toy accessible to the general public!

With its In Mold construction combined to the EPS 4D technology, Salomon's Icon² M White women ski helmet will protect your head with great efficiency.

With the Salomon QST 92 men all mountain ski, you’ve got a versatile ski that can tackle all the mountain no matter the conditions, or the terrain.

The QST Myriad 85 women all-mountain ski by Salomon is a responsive model that can venture on all terrains and all types of snow without trouble. A real one-ski quiver!

The Salomon piste ski S Max 10 is equipped with a stable and high-performance wood and titanium sandwich construction, as well as a multi-turn profile for a manoeuvrable and versatile tip.

This Salomon S Max 8 alpine ski is the perfect balance between power and accessibility, to allow a maximum number of skiers to reach a good level of performance.

The S Max W 10 is a Salomon womens ski performant on the slopes, for intermediate to advanced skiers looking for a precise and lively, yet affordable ski.

The S Race E is a great Salomon piste ski which offers the brand’s expertise in alpine skiing, for your kid to discover skiing in the best possible conditions.

The S Max W 6 women piste from Salomon is destined to newbies who like to take their time and discover the slopes without frightening themselves with its forgiving tip.

The Salomon S Max W 8 women piste ski is pretty responsive and that makes it perfect for intermediate-level riders who want to progress all while having fun.

Enjoy the resort this winter with the Salomon XDR 78 ST, a ski for beginners and occasional skiers that offers ease and versatility.

The incredible rise of Salomon

When his woodsaw and ski edge workshop opened in Annecy, France, in 1947, Georges Salomon had no idea of the adventure he just began. The man was clever and resourceful and in 1948 he developed new machines for building ski edges in industrial quantities. At the very same time, the company named Salomon launches the first ever cable ski binding.

The brand starts growing and the small workshop in the old town of Annecy gets too small. Salomon makes its first move to open an actual factory. The company stays in Annecy.

In 1957, ideas and innovations keep pouring out of engineers’ brains. If some of them never saw day light, some others made it to the mass market like the Skade which was a new release system or “Le Lift” which was basically the first Salomon ski binding as we know it in our modern world, replacing the old leather bindings. In 1961, the Le Lift changes name and becomes the Emile Allais like the ski champion who is riding it.

The company keeps growing and selling at a larger scale. The factory is too small again and Salomon moves one more time, again in Annecy.

1966 is a big year for Salomon and for the ski industry in general. The brand releases a brand new ski binding featuring for the first time ever an automatic heel release system. Skiing gets safer and that’s a big step forward for the masses. These revolutionary bindings are used at the Portillo World Cup, Chile.

This industry-first binding pushes Salomon’s development to the next level and they start opening branches here and there all over Europe, including Swiss, Austria, Germany and Italy.

Salomon becomes the leading manufacturer of ski bindings and sells over a million units a year. We’re in 1972.

Now mastering the art of crafting ski bindings, Salomon hits the boot market and begins making its own ski boots and Salomon ski poles. A few years later, in 1979, the brand gets rewarded of its hard work and releases the first Salomon ski boot with a rear entry system.

Salomon is a big name in the alpine skiing world but the company is giving a close look at the cross-country ski industry as well. In 1979-1980, Salomon hits the french and swedish markets to sell a new ski system featuring a boot and a binding. We know it sounds like normal life now but back in the day, it was a change.

1985: Another big change. Salomon moves again in its brand new headquarters located near Annecy. At that time, the company revenue is higher than 250 million euros (a little over £220M) and it keeps increasing.

5 years laters, the brand releases its first Salomon ski: the S9000, a sporty performer loved by the crowds. Business is better than ever for the company and in the 10 past years, we’re speaking about 10 millions ski boots sold and 5 millions XC boots.

Salomon skis obtain their official and final approval by the mass market in 1992 after running at the Albertville Winter Olympics.

The 1990’s also bring a wind of change on the brand. It begins to diversify its products and works on other sports from the outdoor industry. They release a pair of light hiking shoes for instance.

Being number 1 at skiing wasn’t enough for the group though and in 1997, Salomon targets the snowboard industry by releasing an entire range of snowboards, snowboard bindings and snowboard boots.

During the 2000’s, Salomon continues in the outdoor industry. The group releases complete ranges of shoes designed for all kinds of use: hiking, trails, running. They establish a partnership with Kilian Jornet who won the 170km UTMB race in just 20 hours. This is a serious boost for the brand exposure.

Leading trends and innovations, Salomon does it again in 2011, bringing another revolution to the ski boot market. Ever heard of the Quest Boots? Well, check them out, they are the first boots to feature a ski/walk system allowing skiers to walk more naturally with their own ski boots. When technology serves comfort, you can’t say no can you?

The brand receives numerous rewards like the Best Overall Ski Manufacturer in 2013 at the World Snow Awards ceremony, or the Best goggles manufacturer the previous year, or again the Best Women’s Snowboard… It seems like there is no ending to Salomon success story and we wish them all the best for the upcoming years!